Tempeste O'Riley > Blog > #bookspotlight > “The Geek and His Artist” and A little Showcasing of Characters!

“The Geek and His Artist” and A little Showcasing of Characters!

Hello! Thank you so  much to Tempeste O’Riley for the blog space today!

I am an unashamed gamer. I love love love playing video games and games from casinodames.com. I have limitations—I get vertigo if I spend too much time in first person—but I still love to play. Many of my characters are gamers. I just can’t resist them.

One of the games I love to play is The Sims 3. I’m what they like to call an architect. I love to build and decorate houses. I also love to create my characters in The Sims. It’s a way to give myself a visual of each of my guys—sometimes even more than the main characters.

I wanted to share the guys from The Geek and His Artist with you today.

First up is Jimmy:

He is patterned after a friend of mine from high school who was just as tall and skinny as Jimmy is from Geek.

I had Simon in my head, though I didn’t have anyone in particular he was patterned after like Jimmy was.

Age: 18
Birthdate: April 12, 1998
Height: 5’7” (Which he bemoans), Weight: 130 (yeah, skinny geek)
Ronnie is one of Jimmy’s best friends. They’ve been friends since elementary school and, while he can have asshole-ish tendencies, he knows when to apologize.

Ronnie is also patterned after one of my high school friends. He was very much like this one, a genius on the computer—the kind you do not want to mess with.

Sean is Jimmy’s other close friend, kind of geeky like he is and bisexual. He struggles quite a bit with it, eventually coming out to Jimmy and Ronnie at the same time he accepts Kip as his boyfriend. Sean has been even more closeted than Jimmy, thanks to ultra-religious parents.

Kip is Simon’s friend and (eventual) boyfriend to Sean. The blue and purple spikes in the book are actually all over his head, not in a mohawk style, but The Sims doesn’t have that hairstyle. The colors are his not-so-subtle way of declaring his bisexuality.

Deck is another of Simon’s skater friends. He likes his plaid and bald head. He tends to keep more or less quiet, but doesn’t mind teasing or sharing his opinion when he wants to.

Deck is quite straight but wouldn’t dream of giving Simon—or Kip or Jimmy or Sean—shit for their sexuality. Tony Fisher 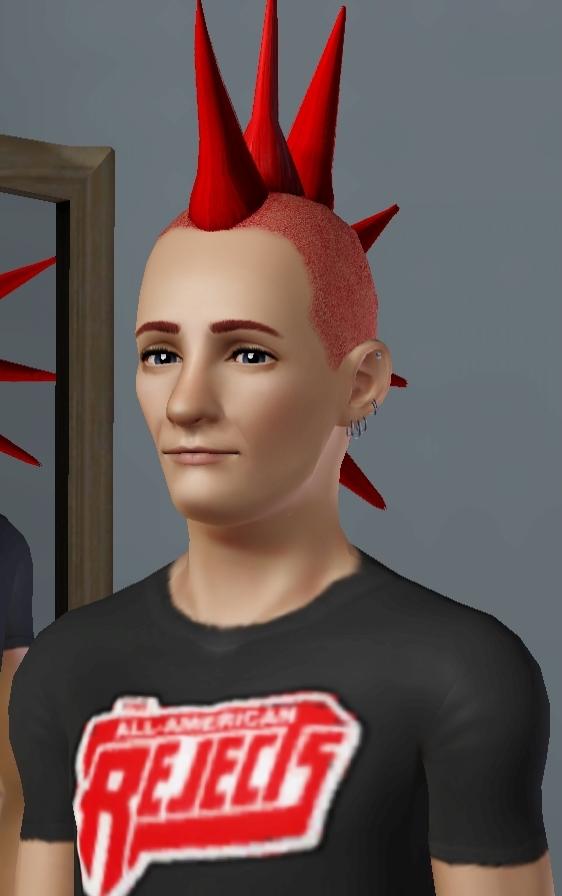 Tony looks like he spends his life stoned, but in truth, he just lets people think that so they underestimate him. He tends to be the voice of reason opposite Deck, when the teasing gets a little over the top.

For more pics of the guys—as well as Jimmy and Simon in their prom tuxes and Jimmy’s mom, check out the full character gallery.

I hope you’ve enjoyed the pictures! Be sure to leave a comment for an entry into the grand prize drawing for the signed paperback and $25 at Harmony Ink! One commenter today will win your choice of a Geek character trading card!

Simon Williams spends his lunch periods drawing his geek and trying not to think about the terrors waiting for him at home. He needs to get away from his abusive father before he suffers the same grisly fate as his mother. Because he’s learned the hard way running away doesn’t work, he’s counting the days until his eighteenth birthday.

Jimmy Bennet should be spending his lunch studying so his senior GPA is good enough to get him into college, but he can’t seem to focus thanks to his distracting artist. When he’s given the opportunity to tutor Simon in Trig and discovers Simon’s home-life nightmare, he wants nothing more than to get Simon out of danger. This need becomes more urgent when Simon comes to school the Monday after their first date with bruises, but it takes a broken leg before Jimmy can convince his boyfriend the Bennets really want him.

But the danger Simon thought was past shows up at the most unexpected time, and he must stand up to the fears he’s held so long to protect not only himself, but the man he wants to spend his life with.

You can get Geek here:

Hope Ryan is an out and proud bisexual, wife of a loving guy and mother to three, including an amazingly brave gender fluid son. She loves to write about the tough stuff, but also wants to see her characters happy in the end. She feels strongly about showing there is hope for everyone, no matter where you come from, how you identify your gender or who you love.

Hope likes to play board and card games and can often be found playing God with her Sims or running around, fighting monsters in a virtual version of Middle Earth. Her TV and movie preferences lean towards anime, sci fi and fantasy, though she’ll never turn down a good happily ever after love story, either. As long as there are explosions or action, she’s happy. She loves to read books of all kinds, though prefers stories about love in its many forms.

Character Development and “Fire and Ice” by Andrew Grey

WIP it Wednesday: “Whiskers of a Chance”

We gain strength, and courage, and confidence by each experience in which we really stop to look fear in the face… we must do that which we think we cannot.