Hello everyone. Today I’m thrilled to have Romance Author H. Lewis-Foster stop by. She’s sharing some about time travel and men in kilts *swoon*. Don’t forget to leave her a little love below!

H. Lewis-Foster has worked with books, in one form or another, since leaving university. As a keen reader of gay fiction, she decided to try writing herself, and is now the proud author of several short stories and an upcoming debut novel.

H. has lived in various parts of the UK and has recently moved to the north of England. She’s enjoying city life, especially the theatres and cinemas, and also likes visiting the beautiful villages in the surrounding countryside. In her spare time, H. loves cooking and discovering the many fabulous local food shops. She tries not to watch too much television, but is a big fan of Downton Abbey, and while she’s writing, she loves listening to Test Match Special (where they spend far more time talking about cakes than cricket!) 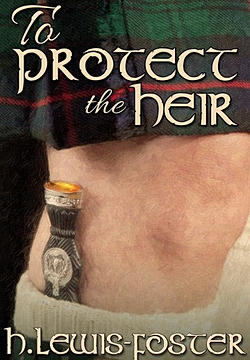 To Protect The Heir
by H. Lewis-Foster

In 16th Century Scotland, the clans are in a state of relative peace, but the younger sons of the Strathyre clan are still expected to serve two years of military service. Mackie isn’t a keen soldier, but his duties have been made more bearable by highly pleasurable encounters with his fellow conscripts. With their green kilts hoisted round their hips, the men find ways of staying warm in the inhospitable Scottish climate.

Mackie’s least favourite task is lookout duty in the woods outside the chieftain’s castle, where he’s forced into action when he spies an intruder among the trees. As a result of the incident, he’s assigned to accompany the chieftain’s eldest son Alexander to his uncle’s castle in Braelen. The trip should be short and uneventful, but when disaster strikes, Mackie’s strength and bravery are put to the test. He soon finds himself in an even more risky situation, as it becomes clear that Alexander wants more from Mackie than simply his protection.

Travelling in Time
(or Men in Kilts)

My writing has taken an unexpected turn recently. It appears to have taken a step backwards – in time, that is. While characters delve into the past in one of my earlier stories Secret of the Code, I hadn’t written a real historical piece before. Now I seem to be travelling through time with each story I start. I have stories coming up in Regency London and an Edwardian stately home, while my new short story To Protect the Heir is set in 16th century Scotland. I’d like to say I have an academic interest in Celtic history, but I’m afraid it’s more down to the fact that I just love a man in a kilt!

Before you start thinking how very shallow I am, there is a good reason for this particular predilection. For a man to wear a kilt, he has to be pretty damn confident. Most men would feel highly exposed in a kilt when they’re used to being covered up most of the time. And unless he’s in similarly attired company, he’s probably going to get some serious stick from his friends. So if a man has (if you’ll excuse the expression) the balls to wear a kilt, I find his confidence and individuality extremely appealing.

The kilt also plays a significant role in the plot of To Protect the Heir. Soldier Mackie uses the colour of a stranger’s kilt to differentiate between friend and foe, and its thick tartan cloth provides welcome warmth in the bleak northern climate. On occasion, it’s also a cosy blanket to wrap around himself and his lover as they lie beside a campfire.

It was great fun writing this story, and I especially enjoyed its sheer physicality. It’s about soldiers who battle against their enemies and their harsh surroundings. They fight for their lives and for each other, with no time to think or plan ahead. They act instinctively in all they do, whether in the field of war or love. They have no idea what dangers might be lurking in the darkness, so they make the most of every minute they have. This sense of urgency brings with it a definite freedom for the characters, which is also typified by the unhindered nature of their clothing.

I loved writing about historical characters in kilts and I love to see a man in a kilt today. For me, that piece of tartan cloth represents confidence and individuality, freedom and physicality. (Or maybe I just like a strong pair of calves and a tempting glimpse of thigh – I’ll let you decide!) 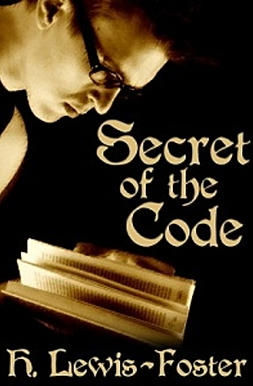 Secret of the Code
by H. Lewis-Foster

Seth is a librarian in an English university, whose love life consists of clandestine assignations with charming academic, Martin Burnell. Knowing there’s no future in the relationship, Seth concentrates his efforts on his work. When he’s not issuing books to students, Seth sorts through boxes of papers bequeathed by the late Professor Lanyard, among which he finds a page of indecipherable code.

Finding himself hopelessly behind with the project, Seth accepts the help of postgrad student, Tim Sellors. Seth enjoys every minute of their work together as Tim becomes a good friend, and he knows he’ll be sad to see Tim go when he leaves at the end of the year. But as Seth lifts the lid on the final Lanyard box, he could never imagine what secrets might be revealed, both in the past and the present.

You have brains in your head. You have feet in your shoes. You can steer yourself in any direction you choose. You’re on your own, and you know what you know. And you are the guy who’ll decide where to go.